This activation will likely be the last one for this park and perhaps for many across the country as cold weather sets in.  Not to be discouraged by a little rain, the three members gathered rigs and equipment and set off to put a few hours in.

Planning to use an IC7300 and IC7000 owned by two of our members, an AH4 antenna tuner on 20 and sloper dipole on 40 were planned.  Fred used his compressed air gun to launch a line over nearby trees to support the antennas for both these stations.  This compressed air machine launched the line completely over the trees, allowing a tether line to be drawn over and firmly anchored both antennas.

Band conditions were not good, and CW was the planned mode of choice, but even that was not enough to gather many contacts.  40 meters proved to be the ‘better’ band as a number of contacts were made there, but due to some RFI issues, the computer running N1MM kept crashing so the 20 meter station was not able to make any contacts.

Ralph, Fred and Hugh managed to hang on under a tent cover for three hours, operating between 11AM and 2PM before calling it a day and heading home for a hot shower. 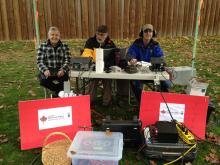 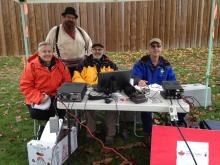