Club members gathered at the Lounge in the Centennial Arena for this year’s annual winter contest. For this event we would be using various HF radios that members brought and wanted to test. Ralph brought his Icom IC-7000, Hugh brought his older Icom IC-745 with a manual tuner, Eric brought his KX3 with 100 watt amplifier. The three were set up next to each other and the OCF antenna that is permanently strung above the building was switched between the radios.

Ralph was the first to go live on 20m, with his system set for CW, he soon had over 20 contacts in the log. When he wanted a break, we switched the antenna to the IC-745 where we tried a number of things to figure out how to get it on the air. Eventually we got there and made a few contacts on 20m. Next we set up the KX3, Eric tried a number of calls but the pile-ups were annoying and the band busy so he switched to 15m and found a loud station. Picking a frequency 5K higher he started calling and soon had a pile-up of people trying to get through. After around 20 contacts he took a break and Ralph went back to CW calls on 15m.

By lunch time we had had enough operating and with 70+ contacts logged we packed up the gear. It was a successful event and we had fun testing the three radios and making contacts from the east coast to the west coast. 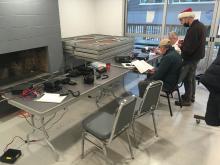 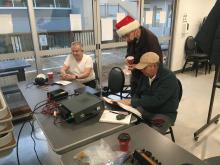 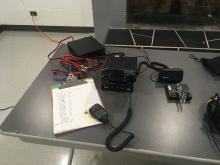 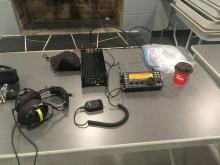 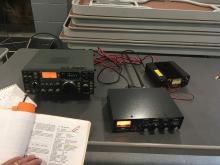